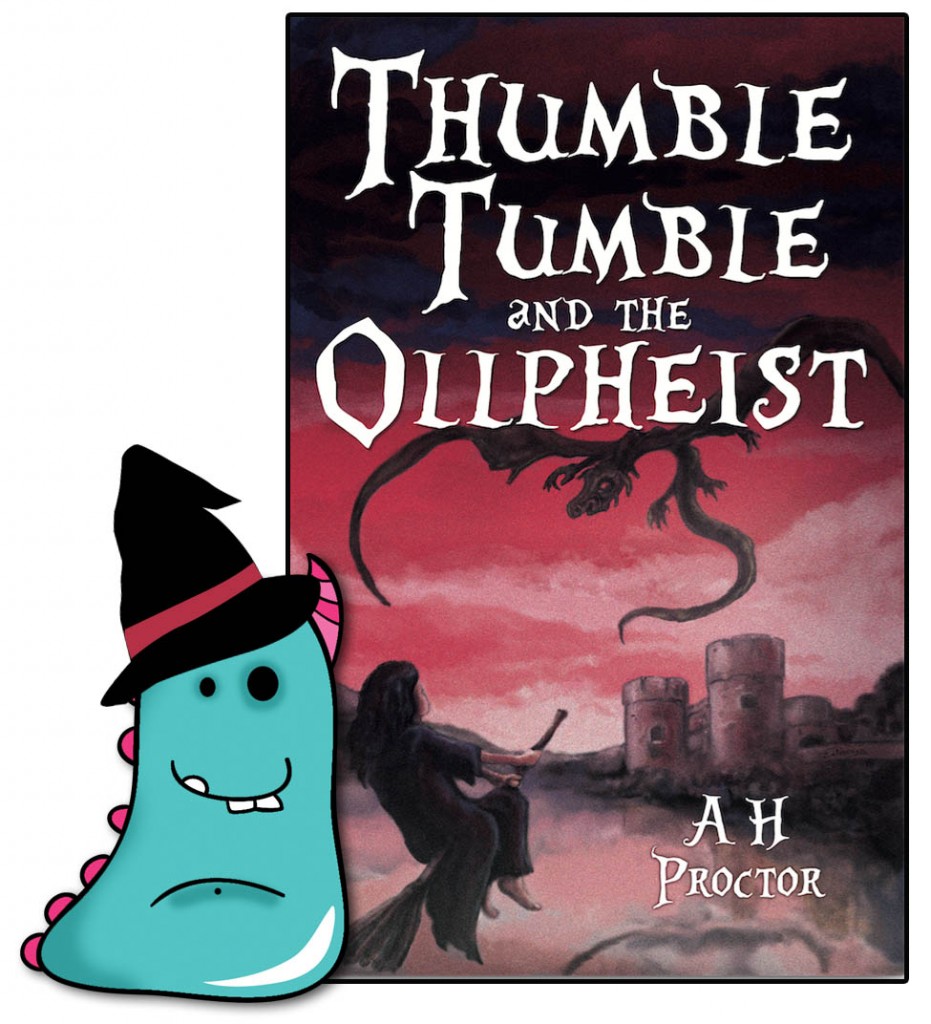 I was sent this book a while ago and shamefully it has taken me this long to read it (sorry Angela). But, in all honesty, it was worth the wait.

This is Thumble Tumble and the Ollpheist written by A. H. Proctor.

Are you into fairy tales? Legends? Mythical beasts? This book has it all, in a lovely compact little package.

After  an introduction to the history of the coven of witches, and how, within their existence, lays the balance of good and evil. We have the White Witches (good) and the Night Witches (bad). We launch quickly into a tale of one powerful bad witch called Mogdred, who was slowly but surely spreading darkness across the world through her evil doings. Three young witches, sisters, Lizzie, Isla and Bessie set out to defeat Mogdred! All set to the backdrop of the beautiful island of Arran.

They succee and defeat the evil Mogdred, but with the loss of Lizzie’s life, and only a temporary end to the Night Witches’ evil doing. This is a great, action packed introduction to the story. It sets the scene beautifully and gives the book a great, engaging start for children.

We are then taken to Thumble Tumble’s story. Thumble Tumble is a White Witch, Lizzie’s daughter in fact, who now lives with her aunts Isla and Bessie. She decides she wants to watch the Great Games which are taking place and so devises a cunning plan to get herself there by offering to deliver the Scoffalicious Chocolate (great name) to King Rohan, the King of the Deer Folk.

The games do not start until after dark, so Thumble Tumble’s aunt agrees to let her go, but only on the proviso that she returns before nightfall. However, this wouldn’t be much of a story if everything went to plan would it? Thumble Tumble gets caught up in a battle of good over evil just like her own mother did years before. I will leave you to read the book and discover what happens! But let me tell you, it’s a rip roaring adventure.

Thumble Tumble is a quick read, but by no means lacking in story content. It’s a fast paced, action packed story, with a traditional feel to it. The content is not patronising, and some of the later fight scenes don’t hold back at all making this a good book for older children and teenagers. This isn’t a read for very young children, despite its shorter length. It would be ideal for a more reluctant reader, who may find longer chapter books a bit daunting. Or a keen reader and lover of fairy tales who wants a quick read.

The language is lovely in this. A. H. Proctor, gently takes us by the hand and leads us through a magical world of sea dragons, witches, flying carpets and deer folk.

Each one is explained wonderfully along with the setting of Arran so it becomes a bit of an education as well as an adventure. I felt like I had been sucked into old, magical Scotland and bathed in a world of fascinating creatures.

I loved the characters in Thumble Tumble. They are on the whole (apart from the evil witches of course) a very sympathetic, loyal and sweet bunch. Really appealing to read about. The Sea Dragon in particular completely stole my heart. Thumble Tumble is included in this, but I also loved her bravery and boldness a real hero of the story, which is a wonderful thing to find in a female character. We should be encouraging representation of strong young women in children’s books. And she is certainly that, but with a kind heart, a bright mind and a hint of mischievousness.

This is a complete story, but it’s left with a very clear opening for a sequel and very exciting it would be too, so I hope to read that in the near future.

So what can you expect from Thumble Tumble? Well, action, bags of it, mythical beasts, witches, battles, Great Games and heart, all told in a traditional, fairy tale style. It is unlike much of what is around currently and I know many of our library users would love its uniqueness.

You can find out more about Thumble Tumble and A. H. Proctor on their website here (just watch out for witches!!).
– http://www.thumbletumble.co.uk

Thank you for reading this rather mystical Book Monster review.