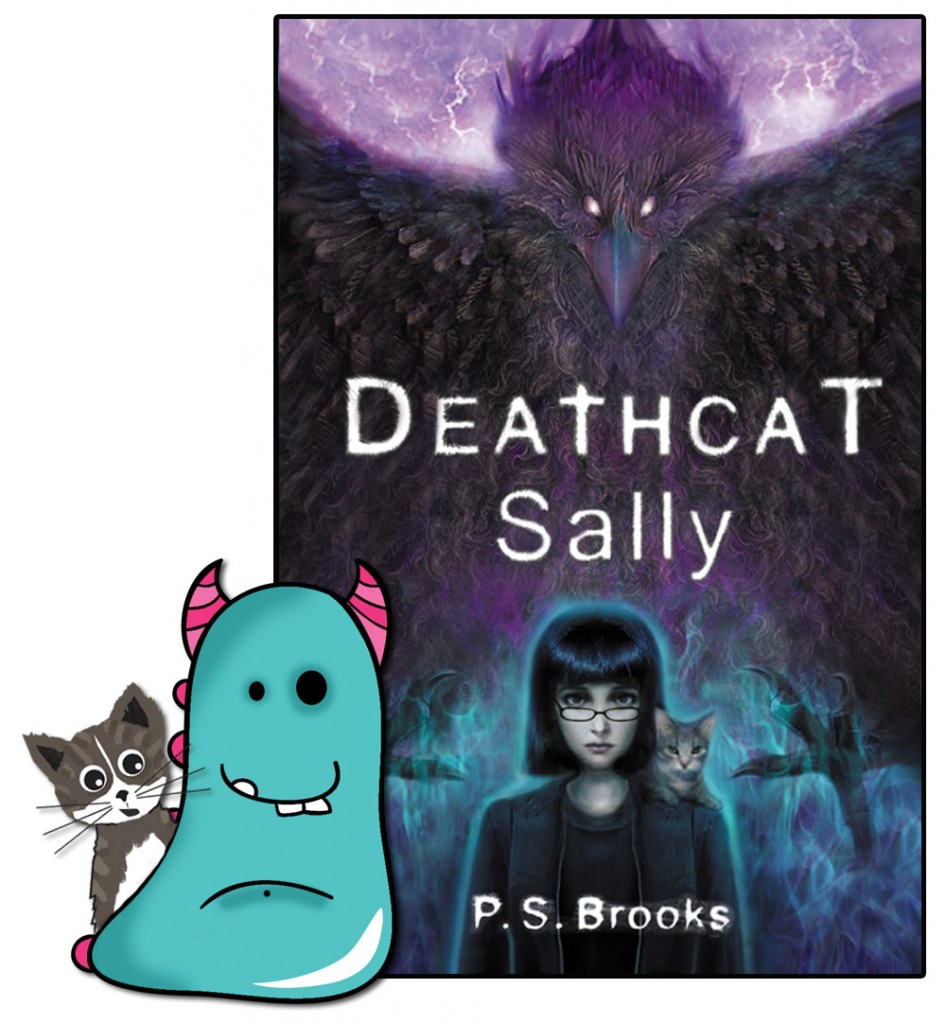 I first cyber met the wonderful P.S. Brooks last year on Twitter. Primarily an artist/illustrator his work is beautiful and he is also thoroughly lovely and decent, so please do look him up – @P_S_Brooks

Then, I discovered that Patrick had written a YA novel named Deathcat Sally published by Pegasus Publishing. I was duly sent a wonderful package of goodies. In truth the best marketing pack I’ve ever received for a book. These are just some of the bits that arrived. But, the most exciting part? The book itself of course. 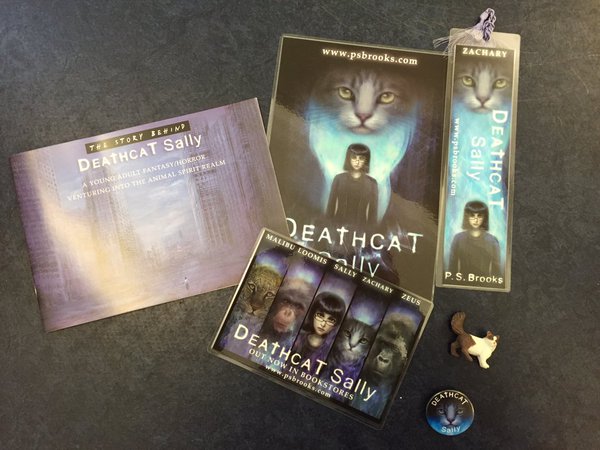 So, what’s Deathcat Sally all about? Well, are you prepared for the unconventional? Because you’re certainly going to get it here. This is a story of 17 year old Sally Rancher, who is stuck in a rut in her life, not really happy in her work or her relationship, but unable to change things. However, one day, it’s taken out of her hands when Sally knocks over a cat named Zachary. Poor, unlucky Sally is then hit herself as she tries to help him. When she awakes from a coma after the accident, Sally discovers Zachary’s spirit fused to her shoulder, and even more strangely, Sally can now talk to the cat and all other animals!
Things take a peculiar turn, when, every time Sally falls asleep she is dragged into No Man’s Land, a frightening realm filled with bitter lost animal spirits, trapped and wanting revenge. Sally and Zachary get sucked into solving a mystery, that not only concerns themselves, but all life on the planet.

Like Patrick’s artwork, Deathcat Sally has a magical and spiritual feel to it, well considering it’s full of spirits and other realms, this makes sense. I suppose what I’m trying to say, is that Patrick’s writing is very much reflective of his artwork, really quite mystical, celestial even. Deathcat Sally has, in fact, been illustrated by Patrick, from the beautiful cover design to scatterings of small illustrations inside the book, you get a strong feel for the work of Mr P.S. Brooks and it all adds to the package here. 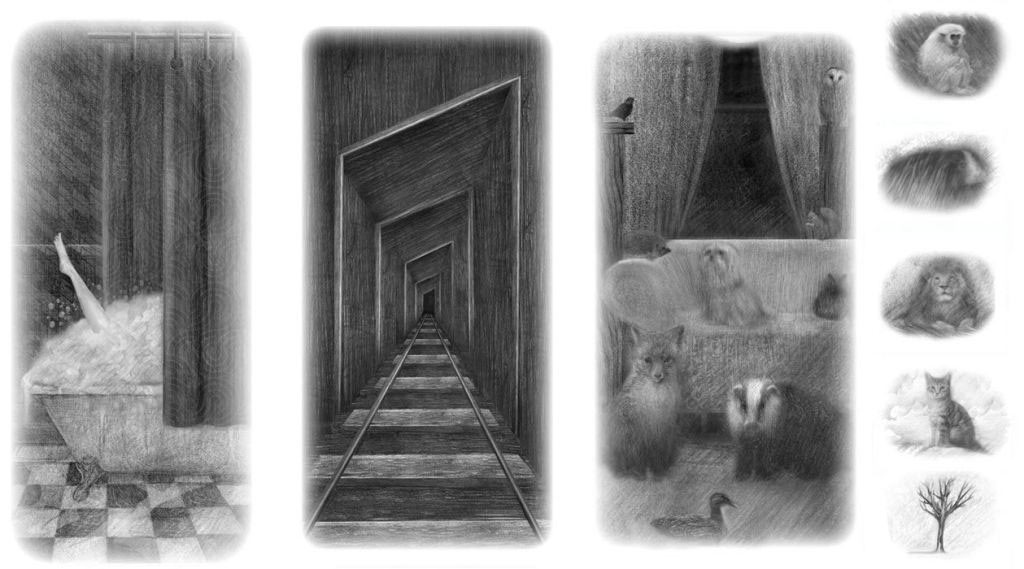 In terms of characters, Deathcat Sally is packed to the brim with many different and strong characters all with their own carefully thought out personalities. We start with Sally. To begin with, she comes across as quite sad, lonely, struggling to find her place. My heart went out to her. Yet as the story develops, so does Sally, and in the end she is brave and plucky, it’s a wonderful transformation!

Zachary the cat is annoying to everyone, big mouthed and sarcastic, and yet, again, by the end, he shows a kindness and soft side that you will love. Amongst these two wonderful personalities is a huge mix of different animals, from Malibu the sassy leopard to Zeus the wise and gentle gorilla. This book contains every animal you can imagine, all with their own very individual and unique characters. It’s been very well thought out by P.S. Brooks, he clearly knew what he wanted from everyone in this book, they all have a pivotal part to play.

The whole story is a rather crazy ride through the spiritual No Man’s Land. For me though, the action really gets going from Chapter 10. Interestingly, talking to Patrick recently, he told me he was inspired by a lot of the fantastic 80s movies and funnily enough, the very first thing that came into my head while reading these final chapters was Indiana Jones! The action scenes here are so reminiscent of those brilliant films, racing through rooms, tunnels and caves filled with traps and hazards, but with the added element of evil spirit creatures also giving chase. It’s fast-moving, exciting and thrilling to read. 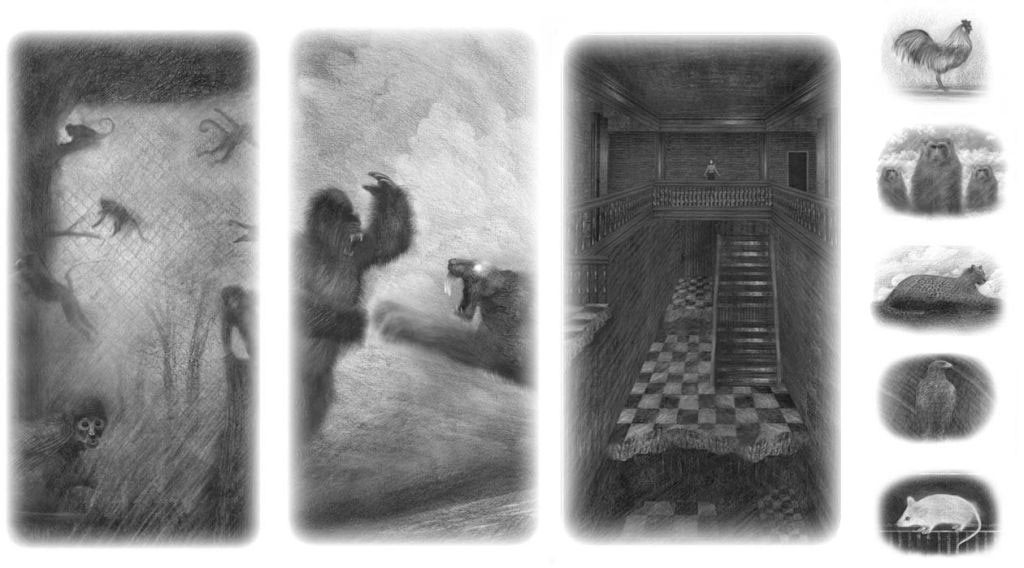 Deathcat Sally is full of action and suspense building up to the ultimate epic ending! Yet it has emotion and actually quite an important message to get across here. This book addresses the way in which some humans have treated animals in the past, and also how we treat them now. P.S. Brooks gives animals a voice and with it the ability to show their emotional intelligence. We are shown how abuse and poor treatment of animals may make them feel, how humans have impacted on so many animals’ lives. This is a story of responsibility. Patrick uses various devices to explain and show the feelings of the animals, and it all works remarkably well. It’s also terribly sad, but a serious point that should be made. The message in this book is really what it’s all about. It is clear that this is very important to the author, and rightly so, but he has not allowed it to get in the way of great storytelling. There is a perfect marriage here, between moral message and plot, making for an exciting yet thought provoking read.

So who is Deathcat Sally for? There has been a little debate about this I believe. Personally, I think we’re looking at 13+ for this. It’s a hefty read at nearly 400 pages of fairly small type and advanced (but wonderful) language. Also some of the content in places does get a little gruesome. Nothing inappropriate at all, but perhaps only really suitable for the really brave younger readers. I would be very happy to recommend this to teengers and older. Adults would absolutely enjoy this too, it’s an ideal crossover book!

So to sum up, this is a rip roaring supernatural adventure story containing action, personality, emotion, other realms and a very important moral message. If you love animals, it you love excitement and if you love a book that will suck you in, then, Deathcat Sally … read it!

P.S. Brooks has a world of his own on the internet. It contains the story behind Deathcat Sally which is quite fascinating reading, along with Patrick’s stunning artwork. Check it out here:
– http://psbrooks.com

Thank you for reading this spiritual Book Monster review.