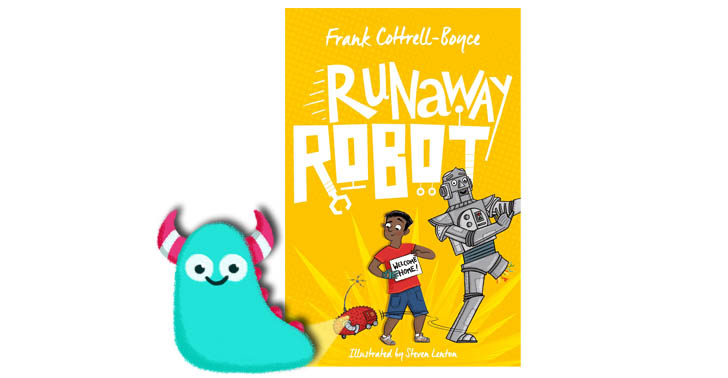 There are some author and illustrator teams that you can’t help but get particularly excited at when you see their book arrive and the wonderful Frank Cottrell-Boyce and Steven Lenton are one such team, that’s why I jumped at the chance to receive a review copy of The Runaway Robot from Macmillan Publishing, and I was certainly not disappointed.

I had no idea when I got this book that it’s actually based on a real robot, it existed and was built by Captain W Richards and his friend Alan H Reffell and was first shown in a public exhibition in London in 1928. Here he is in all his glory:

What an amazing creation. Well imagine being a boy, who’s lost his hand in an accident he can’t remember, lonely and lacking in confidence, then coming across a robot called Eric, exactly like this one, what adventures and excitement this could lead to. Frank Cottrell-Boyce’s new book The Runaway Robot takes us on that very adventure with young Alfie as he befriends an illegal robot at a time when he needs it most.

Crikey I love stories that are inspired by some sort of truth that can then be investigated further after reading. It makes for a multi-layered reading experience, and when that thing is as cool as a real live robot it doesn’t really get much more exciting does it?

Frank Cottrell-Boyce has a real knack for coming up with crazy, wonderful, exciting stories that children will really want to read about, but that include some important deeply emotional topics making a story so much more than just an adventure. The Runaway Robot is such a fine example of this covering numerous themes such as disability, bullying, friendship and loneliness an underrepresented, yet an incredibly common and important issue. These topics can be difficult to tackle as they are emotive and heartfelt and quite upsetting at times, but Frank achieves it so brilliantly with his ability to bring in gentle and genuinely funny, humour into the story. I loved the humour in The Runaway Robot, there were moments when even I had a real chuckle myself. Humour is such an effective method that we as humans use to cope with difficult situations that it makes a story all the more real, it also makes the more serious notes much more poignant when a book has such a beautiful balance of emotions throughout.

This is one of the first books I have read with the main protagonist having a disability and it’s sensitively addressed. The way Afie’s disability affects him is surprising, for example he struggles to fit in at the Limb Lab that he attends because he finds adjusting to his new hand tricky, where as at his previous school children are curious and enthusiastic about his differences, it’s a little opposite to what you’d expect. Also addressed in this book is trauma and how someone might deal with this. In Alfie’s case it is to block out the circumstances of the accident which caused him to lose his arm. As the story unfolds so his memory starts to return and we find out, gradually, what happened to him and how much worse it actually was. It makes for incredibly touching reading in the end particularly with a twist I really wasn’t expecting, and here is an example of a children’s book that can teach children empathy.

Again it is the humour here that lift these difficult moments. I loved the Jeeves and Wooster feel interactions between Alfie and his not-so-obedient robot friend, it was so sweet, the, at times, infuriated affection Alfie displays towards his new robot friend, they lift the pages and prevent the story becoming too dark, in fact quite the opposite.

Steven Lenton’s illustrations serve to add interest to the story and are wonderfully done. Peppered throughout the book they’ll serve to keep children engaged and just add a little extra fun and context to the writing. Steven’s representations of the robot are fabulous and he’s kept true to the style of the original real life Eric which is lovely.

I have to also give a nod to The Boy Fitz hammond for his fantastic cover typography. He is responsible for all the titles on the latest Frank Cottrell-Boyce books and they’re beautifully done, eye catching and unique. It was a stand out aspect to the front covers for me, and as someone who has purchased many many a book on a funky front cover alone, the power of this is not to be underestimated.

The Runaway Robot is a fun, futuristic, adventure-filled, fast paced yet incredibly emotional and deep book for younger children. One sure to appeal to multiple audiences and one they will whip enthusiastically through in no time. It is the full package in beautiful packaging.

Here, for your enjoyment is a little snippet from the book for you to tease and tickle your reading-buds.

I’m part human/part machine.
I’m a bit bionic.
I’m like Wolverine.
You could call me Alfie Wolverine.
That’s not true, by the way. Not going to lie: I’m not
even one bit like Wolverine. ‘I’m like Wolverine’ is one
of the things they teach you to say at Limb Lab during
New Limb, New Life lessons. They worry people
will laugh at you or start hating on you for being part
mechanical, so they teach you a load of jokes and putdowns.
And, in case the jokes don’t work, they teach you
karate.
They even teach you what to think.
For instance, don’t think too much about how your
accident happened. Accidents happen. End of. Start
talking about it, and you’ll start thinking about it.
Start thinking about it, and you’ll soon be thinking
bad thoughts such as, Was it my fault? Why didn’t I

just . . . ? etc. Rule number one: don’t talk about it.
Talk about something else.
That’s the advice.
So I’m not going to talk to you about me.
I’m going to talk to you about Eric.
Eric is missing.
There is no sign of him. Weird, because normally
wherever Eric goes he leaves plenty of signs. For
instance: broken doors, crushed wheelie bins, and, one
time, a car stuck up a tree. (Controversial!)
Today, there is nothing. No clue. It’s like he’s
evaporated. It’s not like he would be easy to miss . . .
Eric is six foot six.
He likes to sing.
He’s super polite.
He does as he’s told.
He’s made of metal.
When he’s cheerful, his eyes light up. Literally.
When he’s worried, he spits fire. Literally.
Eric tends to take thing literally.
He can prepare light snacks.
Get rid of unwanted guests.
He can be conveniently stored in a shed.
He is magnetic when anxious.
Everyone knows him.
No one has seen him.

The thing is, I really want to find him for you.
Eric always says if you lose something try to retrace
your steps.
So I’m retracing my steps.
These are my steps . . .

The Runaway Robot is now available from all good book shops and libraries.

And you can find out about Steven Lenton on his website here:
– https://www.stevenlenton.com

The Boy Fitz Hammond can be located here:
– http://www.tbfh.com

Thank you to Macmillan for sending me a copy of this book, and thanks to you for reading this Book Monster review.